The Summer Adventures of Lynda Cummings

Lynda Cummings experienced a four-part, muti-faceted adventure this summer.  She began with a two-week walk along a circuitous path through the Cotswolds district in England.  She and a girlfriend carried minimalist backpacks, hopped over gates, greeted hundreds of sheep, and marched through field after field of wheat and rapeseed. The recent rains brought breathtaking beauty to the landscape, to the flowers at Hidcote Gardens, and to the grounds at Blenheim Palace. 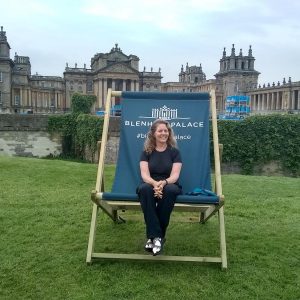 Lynda’s adventures continued the moment she arrived back in the States.  Her family immediately whisked her off to the Rogue River, where they enjoyed four days of whitewater rafting along the “wild and scenic” section of the river, a section accessible only by boat or foot.  They saw bears in an apple tree, muskrats in the reeds, and bald eagles in the skies. Even more amazing, they learned on the first day that they would be rafting the river with a Midland family–Jenny, Julia, and Allie Rigby, the mother and sisters of Chris Rigby, ‘06.

Part three of the adventure took her family to the Sierras near Donner Pass for 10 days.  Before the Cummings family arrived, they had planned to connect with Peter King, ‘12, who is currently hiking the Pacific Crest Trail. But plans turned out better than they expected when, on their first day in the mountains, they encountered Peter, who was approaching the half-way point along his months-long journey from Mexico to Canada.  They hosted him for three days, giving him a chance to shower, restock supplies, and eat as much as he could. 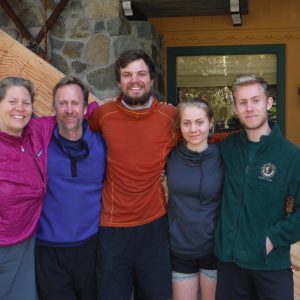 The Cummings Family with Peter King ’12

The adventure ended with a fabulous week at St. John’s College in Santa Fe, New Mexico.  The college invited Lynda to spend a week studying Jane Austin’s Pride and Prejudice so that she would have a better sense of how Socratic seminar discussions influence all aspects of the great books curriculum at the college. The week offered more than just academic study; it offered Lynda the opportunity to reflect on her travels, on Midland, and on how, as Austin’s main character, Elizabeth Bennet, says, “But people themselves alter so much, that there is something new to be observed in them forever.”