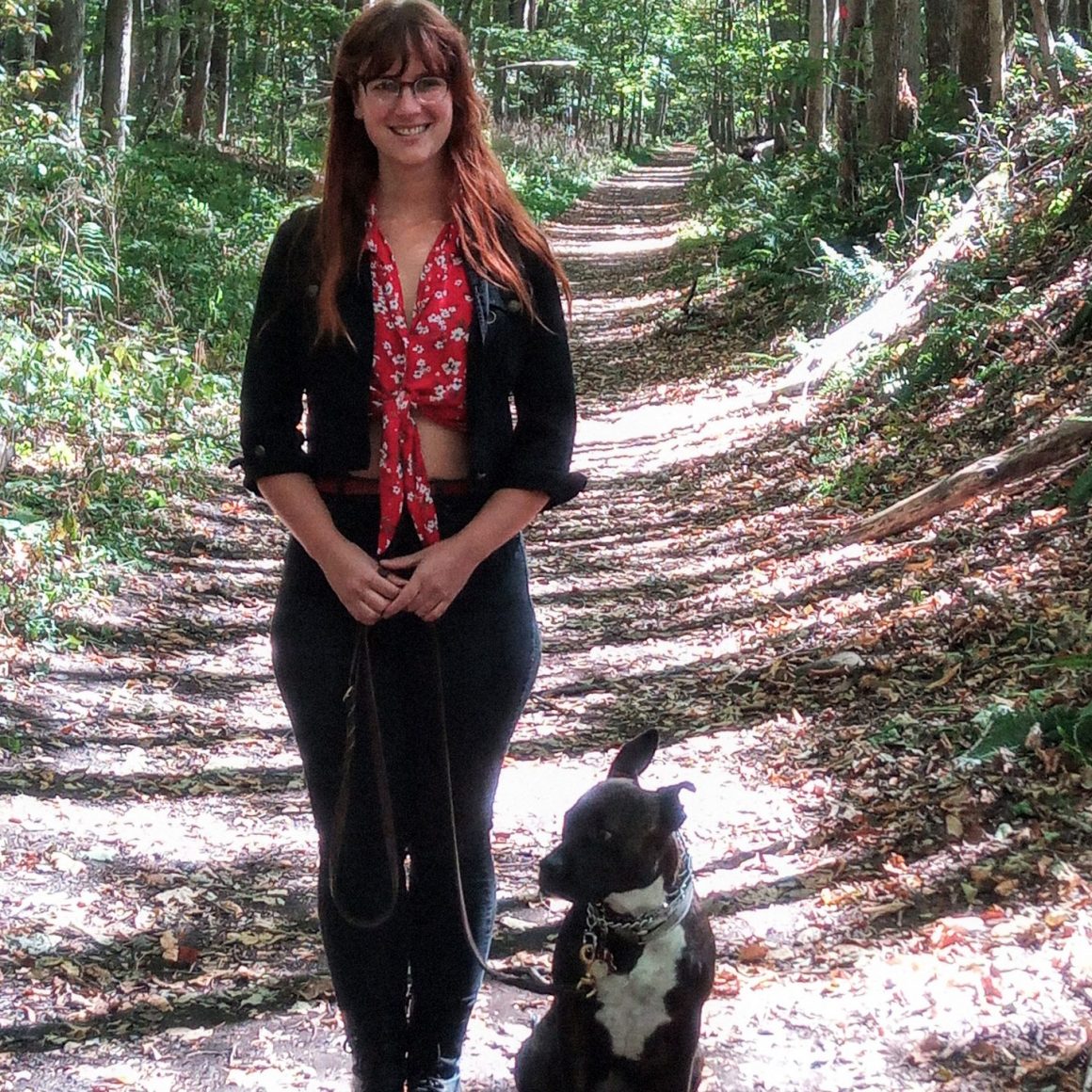 Sophia and her dog

Sophia’s parents stumbled into Midland at a Cambria art gallery, leaving a conversation with a student’s grandparent with deep interest in what Midland might be able to offer their daughter. Joining as a transfer student her junior year, Sophia was nervous about entering an already-formed community midway through her high school experience, but she “knew it was the right thing” and made the leap.

Though it took some time to adjust to the “whole different world, whole different language” that Midland presented, she quickly bonded with her roommate Frances King ’09 when they realized they’d packed 75% of the same for-fun books for their dorm room. From there, Sophia became swiftly integrated into the Midland community. She and a group of friends in the years above and below began affectionately calling themselves the Gypsias of Gaia (they’ve since reflected on using the derogatory term “gypsy” and have adjusted towards Gremlins, Goblins, Guardians and sometimes even Giblets of Gaia), who would make costumes within which they trounced around the Midland property. Many of her GoG friendships are strong to this day.

Academically, Midland pushed Sophia to stretch herself. Classes were challenging, but in a good way. Though she excelled (and reveled) in reading and writing — and is a self-described “word person” — Sophia realized she equally loved discovering how things worked and enjoyed challenging herself. In Chris Ray’s physics class her senior year, Sophia was fascinated by the hands-on approach to the class (she remembers making musical instruments fondly) and began to have inklings that physics might be something she wanted to do with her life.

After graduating from Midland, Sophia took a gap year to dedicate towards dressage, a passion she’d continued to pursue through her time at Midland. She spent the year raising and breaking a young dressage horse before turning her sights on college and a degree in Physics.

University of California, Santa Cruz, was an obvious choice for Sophia — they had a fantastic physics program with in-state tuition, and she had a network of family friends from the time her parents had been faculty members there. Plus, her roommate from Midland was at UCSC, too — it was like returning to a home away from home. “Going to Midland made it way less of a big deal to go to college. My Midland roommate and I had a similar experience where we felt really old compared to the rest of the students. Both of us had taken a gap year — but it had more to do with the fact that these people had never left home before. I can’t count number of boys that I saw in the laundry room on the phone to their mom saying ‘how do I do this!’”

As she easily adapted to college life, Sophia faced a challenging physics curriculum. Luckily, her time at Midland had well-prepared her for the material she was taking. Granted, the gap year made jumping back into calculus a “tad rough” — but she was able to recognize and build upon the basic foundation that had been laid at Midland. Some of the determination that had begun brewing at Midland ( especially as one of two girls in her Midland physics class)  persisted through her undergraduate experience; in a cohort of a few hundred students at UCSC, only two women, including Sophia, stuck with physics all the way through the end of their degree. As much as it was the hands-on nature and complexity of physics that fascinated Sophia, a part of her was simply determined to stand up for women in a field of study dominated by men. “Physics still remains one of the least welcoming places to women — which made me kinda stubborn. I decided,  ‘I’m taking this all the way!’ and I did.”

After graduating from UCSC with a degree in Physics, Sophia went on to graduate school at Cornell studying plasma physics in their engineering department. Plasma Physics, a relatively unknown field in the realm of physics and engineering, allowed Sophia to combine two things she loved: physics and renewable energy. “There were many books in our house like Silent Spring and the Last Stand — [renewable energy and environmental stewardship] always had been in my consciousness but I think definitely Midland made it more obvious to me that they are things that it’s really important to be thinking about. And it’s not something you can only do if you’re only on the forefront of technology — there are little things everyone can do. You’re a little boarding school in California in 1932 and tied to traditions — if they can do solar panels, everybody can do it!”

Graduate school was challenging — and not just because of the intense research or materials. Sophia jumped right into open-ended lab projects that required creativity and confidence to pursue. “Thankfully, I’m used to finding my feet — thanks Midland! — and know how important it is to ask for help if you need it.” Sophia created a support circle around herself, joining a therapy group specifically for women in PhD programs and finding a mentor through her network back at UCSC. If there was one upside to the “pretty old school” methods of some of the professors Sophia had to work with, it was that the women’s plasma physics community came together to support one another against the challenges they faced.  She put it simply:“As a woman in this field you have to work twice as hard for half as much credit.”

As she continued working towards her PhD, Sophia recognized that “it’s a marathon, not a sprint” and endeavored to support her whole self as a way to avoid burnout. She volunteered for a number of science programs for elementary, middle and high school girls. “Anytime I was able to take a step back from the nitty-gritty of what I was working on to explain the project in broad terms to a 9 year old — it reminds you how fricking cool the work you’re doing is! It’s a great push to keep perspective and an answer to the ‘why am I here’ question.” Meanwhile, she maintained her passion for horseback riding and gave riding lessons to children on the side. 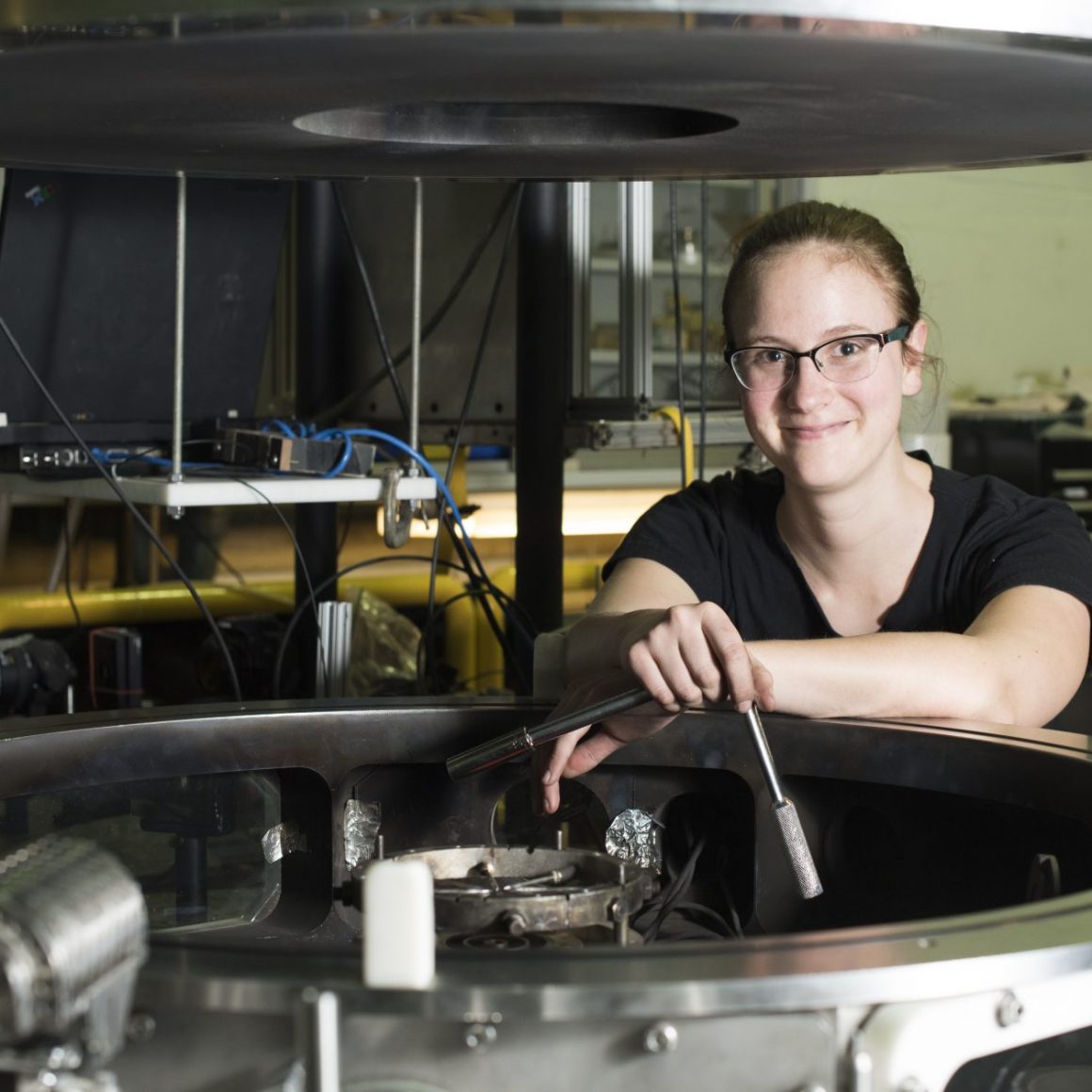 Sophia Rocco in her Cornell Lab

Having just received her PhD from Cornell in Plasma Physics, Sophia is headed back to California for a position at the Lawrence Livermore Lab, where she’ll be primarily working on neuron diagnostic development. She’s looking forward to being back on the West Coast and — once the pandemic abates — connecting with other Midlanders in the Bay Area (and perhaps coming down to campus for a trail ride or two!).

To all the Midlanders out there working on graduate degrees — especially the women in male-dominated fields — Sophia offers the following recommendations: