When Paul and Louise Squibb — excited to start a school founded on the values of uncluttered lives, hard work, and character — found a ranch for rent in California’s “midlands” between Los Angeles and San Francisco, they knew they had found the perfect location for their school. In 1932, Midland opened its doors for the first time, turning a beautiful ranch into an innovative school that still is a leader in experiential and place-based education. For the next twenty years, Paul served as Midland’s head of school with Louise working tirelessly at his side. 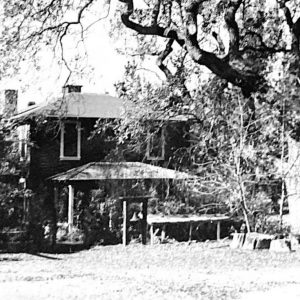 Because Midland was a school founded during the Great Depression, the Squibbs put the values of thrift and minimalism at the forefront of their mission as they sought to provide quality education at an affordable cost. This focus transferred to a sense of preservation for the existing ranch. In construction, the Squibbs utilized preexisting structures and used local, salvaged materials whenever possible, allowing Midland to — even today — maintain a ranch-like feel even as it evolves with the times to technology, pedagogical practices, and, yes, lighting (until 1947, kerosene lamps, not electricity, provided for the school’s illumination needs!)

Paul and Louise believed in distilling education to the essentials — a student, a teacher, and an idea — and built their school around this simplicity. Lessons in distinguishing between needs and wants, finding ways to do more with less, and the hard work that goes into meeting basic needs combined with a rigorous academic curriculum meant that the boys graduating from Midland were intelligent, hard working, and thrifty. They were eager and well equipped to enter the ever-shifting world and embodied Midland’s motto, “In Robore Virtus,” or “Our Strength Lies in the Oak.”

In the years since its founding, Midland has remained true to the values that the Squibbs promoted, while redefining those values to correspond to the current moment. The 1940s saw the addition of electricity to campus, and in the 1970s, the school became co-ed. In the 1980s, computers came to campus for the first time, and Midland’s farm and garden began providing fresh produce for the kitchen in the 1990s. The early 2000s saw solar energy brought to campus and 95% of Midland’s nearly 3,000 acres preserved in perpetuity through the Santa Barbara Land Trust. As we move into the 2020s, Midland aims to broaden conversation and action surrounding diversity, equity, inclusion, and justice and make Midland’s community and excellent education accessible and inclusive to people from all points on the gender spectrum and from all economic and cultural backgrounds. No matter the decade, though, Midland continues to promote a life of simplicity and lives up to its claim to be one of the best place-based and experiential learning institutions in the country.

Why Protect This Land?

Continuing learning about the Midland Experience