Senior Project: How to Tame a Mustang | Midland School 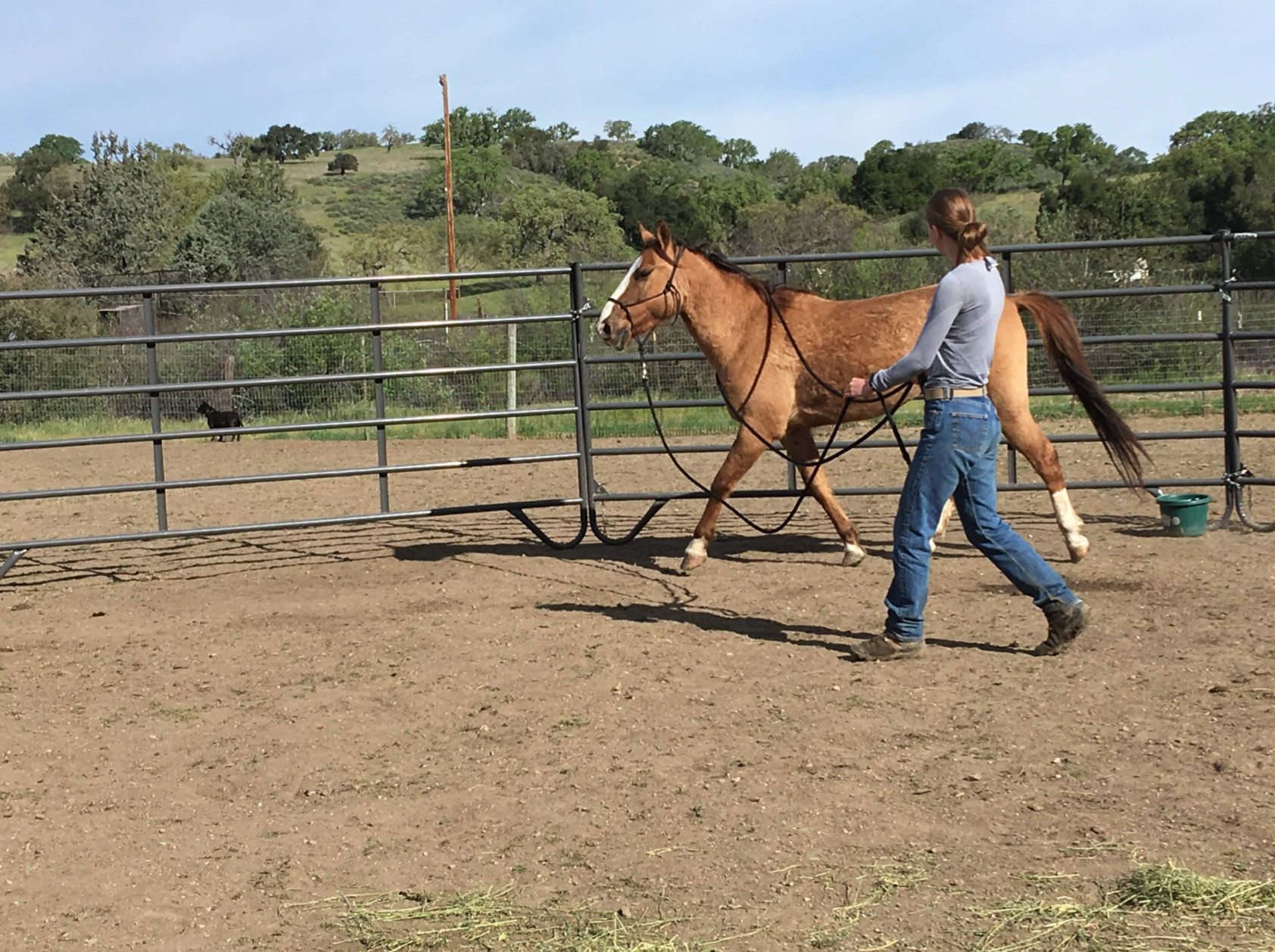 Gentling a wild mustang is no easy task, as Eleanor Larkin ’19 saw firsthand when she embarked on such a project her senior year.

Each senior, equipped with passions, interests and skills developed (or deepened) over the course of their time at Midland, chooses something that excites them and completes either a research thesis paper or an independent project. Over the years, we’ve had students build computers from scratch, harvest honey from hives on campus, dive into the agroforestry, and so much more.

For Eleanor, who had started riding horses at a mere six years old, developing a project that capitalized on her passion for horses was a no-brainer. In her final year at Midland, she began what she called an “ambitious yet doable” mission to gentle a wild mustang named Jerry. Jerry was one of three horses we adopted from Return to Freedom, a nonprofit that acts as a sanctuary for wild horse herds and is dedicated to preserving their freedom, diversity and habitat.

As she worked with Jerry, Eleanor kept journal entries detailing her goals, what she did each day and her reflections on the project. “When working with a horse and ingraining new lessons,” she wrote one day, “it is important to know when to stop and leave it at ‘good enough.’ When a horse takes a step, don’t immediately ask for a leap. First, celebrate the step they took and focus on preserving that lesson instead of asking for more.”

These simple but poignant lessons exist throughout her journal, moments of reflection that are not only powerful for the work at hand but are helpful reminders for everyday living.

Familiarizing Jerry with human interaction was one of Eleanor’s biggest challenges in the project’s early stages, but her patience and determination allowed her to get to know Jerry, his personality, and his mannerisms, and adapt the program accordingly to cater to his progress and specific needs. Slowly but surely, Eleanor lessened Jerry’s fears and heightened his curiosity in interacting with humans.

Something Eleanor reflected on throughout this process was her self-confidence as a trainer — to not be startled or get worked up when Jerry was. Instead, she emphasized being intentional with her training and not tiptoeing around her horse’s fears. He needed to experience something to realize that he can — and will — eventually live through it.

She often sang to Jerry when she felt he was stressed, and found that the best way to connect with him was to combine a training session with some down time where they would relax and enjoy each other’s company.

Thanksgiving week was a breakthrough for Eleanor, as she saw Jerry beginning to enjoy human affection and even allowing many people to approach his pasture and pet him. Another step forward came in February, when Eleanor was able to introduce grooming tools to Jerry and brush him, an astonishing feat given Jerry’s past feral nature.

Over the course of two semesters, Eleanor worked with Jerry for several hours every day. It was through this long term commitment, extensive research and training, and most importantly, the ability to learn from experience and adapt to daily challenges, that she taught her mustang to trust humans and integrate into the herd as a safe, social animal, one who our students now work with regularly in our Natural Horsemanship program.

Through doing so, Eleanor embodied the true spirit of experiential learning, and demonstrated the Midland values of educating as a creative and transformative mutual transfer of information between teacher [Eleanor] and student [Jerry].

Eleanor is thankful towards Gina Butala, Director of Horse Programs and Rangeland Management and Conservation, for her support and guidance throughout the project. She hopes to work as a trainer or rehabilitator for horses later in her life, and is grateful for the skills and knowledge that she has acquired throughout this experience, which she knows she will take into her future career and endeavors.

Two parents think on their child's journey at Midland

A Place of Home for My Son

Written and illustrated by Macy D'Attile '21

All about athletics at Midland

Funded by the generosity of Midland alumnus and former trustee, Jim Cosby '63

A look into how our Jobs Program builds community

The Place Where You Live: Midland School

Based on The Place Where You Live Project by Orion Magazine, written for World Literature, taught by John Isaacson '94

A Midland Win: Pride in a Job Well Done

Our teams may not win sets or make baskets, but that’s because we have a more elusive goal

In her child's senior year, a parent reflects on how her child has learned and grown at Midland